All about Rooibos tea! Benefits, weight loss,varieties,kids,pregnancy,blends Skip to content

Many people are avid fans of South African Rooibos Tea. And for good reason too. That’s because it tastes good, its good for you, and there is a lot you can do with it. How good is it? There are many Rooibos tea benefit claims that people make. But we have done some research and have compiled for you the ten best actual benefits of Rooibos tea in this article. We also have all the history, facts, and recipes, and health information you need to know.

What is Rooibos tea?

The rooibos plant is actually not a teal leaf at all. It’s a red colored bush that grows natively in South Africa.  This region has been brewing rooibos for over 300 years. People enjoy its red color natural slightly sweet flavor. Some people also call it the red tea, or the red bush tea. Also, most other teas that people drink come from the Camelia Sinensis tea plant. This is an entirely different plant variety than Camelia Sinensis. It has needle-like spiny leaves.  First, farmers cut and process the herb. Then, customers can brew it into tea.

What is the history of this red-bush tea?

Rooibos is unlike any other herbal teas since it is a unique plant from the South African mountain region of Cedarburg.  This area of Cederberg is just north of Cape Town. Also, that region is a very diverse place to grow various crops. Farmers appreciate the soil for being very fertile for this herb.

Local people in the region have been growing and harvesting this red bush tea for over 300 years. nearby regions grow Rooibos commercially.

South Africa is the only country that grows Rooibos. And there are nearly 500 growers who grow it there. There are also some organic certified rooibos producers there. South African Rooibos production is around 15,000 tons a year. Nearly half the production is for export.  And its exported mainly to Germany, The Netherlands, the UK, Japan, and the United States.

What is the processing of the Rooibos plant?

Farmers harvest and process Rooibos like traditional tea. They first cut the red bush by hand. Then they bundle up its stems and leaves. Farmers sort and cut or bruise these bundles to oxidize the plant. Oxidation

brings out the plant’s essential oils. This also helps the leaves develop their rich color and flavor. The more oxidized the rooibos, the redder in color and sweeter and richer in flavor it becomes. This is the tea that we know as the red rooibos. A less oxidized rooibos is steamed and dried. It is not oxidized, so it remains slightly green in color. It also retains a grassy, mineral-like flavor. This less oxidized version is called green rooibos.

Rooibos is also graded like tea from the Camellia sinensis plant, where the grade depends on the leaf to stem content ratio. Higher grades of rooibos contain more flavorful leaves and less stem and dust.

What are the health benefits of Rooibos tea?

Rooibos is a natural herb that has been used as a health aid for many years. It has been studied to have several benefits for health that it offers. It can play a role in helping improve overall health. Here are the Top 10 health benefits of Rooibos tea

Researchers found this benefit in a 2011 study in South Africa. They said that Rooibos extract lessened heart muscle damage more than green teas.

People ask about Rooibos tea and weight loss. Researchers in South Africa studied this in 2013. They reported results in a 2013 journal. The researchers said that rooibos extract stopped the formation of fat cells. Also, they said it sped up the metabolism of the fat cells. It does not have any calories.

The same researchers studied its effect on diabetes. Here they said it could help manage blood sugar levels. But they also said the further study was needed.

J.L. Marnewick studied this at Cape Peninsula University in South Africa. His study found that it helped reduce cancer lesions. It reduced the number and size of these lesions.

5. It helps with cholesterol levels.

The researcher above also found it helps with cholesterol. He found that it lowered LDL (bad) levels. Also, he found it raised HDL (good) levels.

6. It reduces colic in children.

Mothers in South Africa use it to help soothe babies with colic. Rooibos is well known for soothing tummy troubles. Also, it is used to help with food allergies and for encouraging good sleep for babies. Colic is a very difficult issue for children and their parents. Breastfeeding mothers drink its tea, and also give some to their infants and their children. Its a natural aid for colic and stomach issues.

7. It is high in antioxidants.

8. It doesn’t have any caffeine.

As an herbal tea, Rooibos tea is naturally caffeine free. So it has none of the side effects of caffeine. And it is a safe choice for infants and tots.

9. It helps you get healthy minerals too.

It is also a good source of magnesium, which is good for overall health. And it helps baby sleep. It also has zinc, which is important for a healthy immune system. Also, its got potassium that supports healthy functioning of the body’s vital organs. And it also has iron. Iron carries oxygen to our blood cells.

10. It hydrates without any calories or tannins.

It doesn’t have any calories. Since it is naturally sweet, its better than sugary juices and sodas. It doesn’t have any tannins in it. Those can make the tea bitter. They can also slow down digestion and interfere with iron absorption in your body.

Are there any Rooibos tea side effects or risks I need to know about?

Herbal teas are not known to be harmful to most people. But it’s a good idea to make sure that in one is careful when trying something new. It is important to check with your doctor before adding Rooibos tea to your diet if:

How about Rooibos tea caffeine? Can it have any? 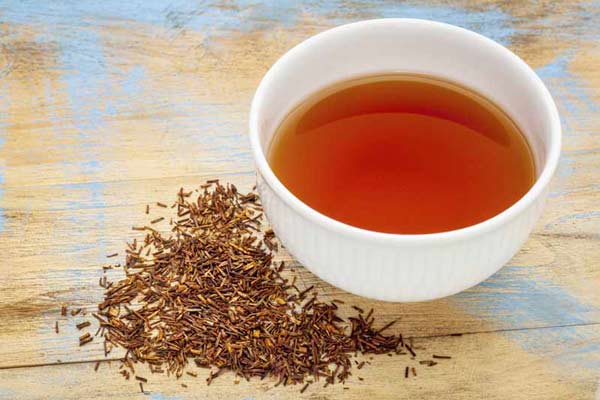 What about Rooibos tea for infants and children?

This tea is often given to children as a natural drink. It can help to keep children hydrated. It has no calories. So its better than fruit juices and Pepsi or Coke. Its natural flavor and red color make it a drink kids often like. People make it as iced tea in the summer too. It makes a delicious and refreshing summer iced tea for kids.

It is used to help soothe and relax kids as well. Researchers say it can help relax kids who are hyperactive and have trouble falling asleep. It is generally seen as being a safe tea for kids. People should check that their rooibos tea doesn’t contain any artificial flavors or colors that can irritate children in different ways.

How about Redbush tea or red tea? What is that?

Is Rooibos the same as red bush tea? Yes, it is. South Africans call it the red bush tea. But the plant itself is not red, its green. And it becomes red after it is oxidized and processed. It is also enjoyed as a tea when it is green. However, most people like it in its red form and like to brew it as a red tea. People brew it as a hot tea and also as an iced tea. You can also add natural dried fruits to it for more flavor if you like.

Is there a Rooibos tea weight loss connection?

People ask “Does Rooibos help with weight loss?” It doesn’t have any calories. So People enjoy instead of other drinks to reduce daily calorie intake. Researchers also found in studies it can help speed up metabolism and block growth in fat cells. Maybe it’s not a way to lose weight fast by drinking rooibos tea, but it can play an important role in improving your health. 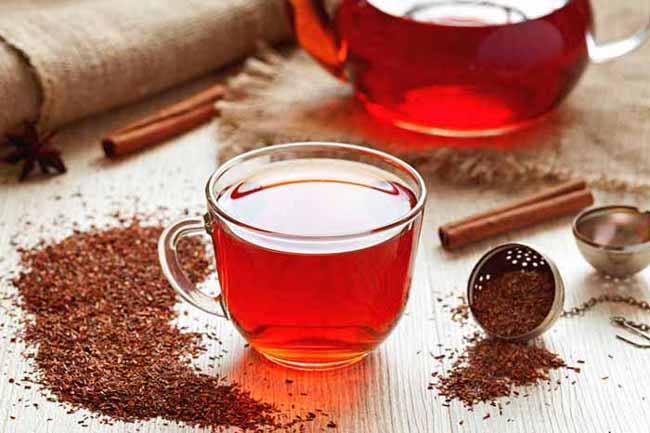 How about Rooibos tea in pregnancy?

Is organic Rooibos tea better for you?

Rooibos tea and acne – is there a benefit?

People enjoy Rooibos as a way to help reduce acne. It is a natural anti-inflammatory. These properties help to reduce acne.  it has high levels of Nothofagin and Aspalathin as well as superoxide dismutase. These are antioxidants that help improve overall skin health. They help reduce bacteria colonies in a body. Herbologists believe that Rooibos is a natural antibiotic aid as well. Researchers have not done many studies on this subject yet. But many people have commented and given testaments to its natural benefits as an acne cure and a help to fighting acne. 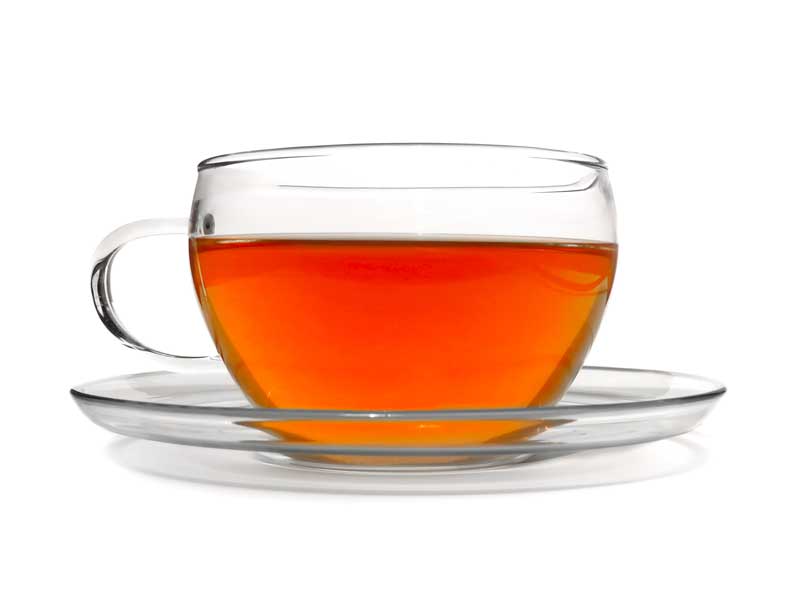 One thought on “All about Rooibos tea: benefits, origin, best blends”